My 9th std Chemistry was taken by three teachers. Usha madam went on leave and then Bindu madam took charge. But then the unkind KVS transferred her elsewhere. Finally Devaki madam took over towards the end of the term. The reason I mentioned this is because of one project in Chemistry that Devaki madam asked me to submit. It was nothing special. I made a bathing soap. But the interesting story is what I did with it. Here is the whole story:

I bought sodium hydroxide to prepare the solution for producing soap. I was glad because it was a new chemical to add to my lab. Anyway I dissolved some NaOH into water and then mixed coconut oil and Eau de Cologne into it. After a while the solution solidified into a white substance. I left it for a week and then cut it into pieces. We first tried it as a washing soap and it worked. Then I took bath with it and I was happy because it worked as a bathing soap as well. I took it to school and submitted as my project. 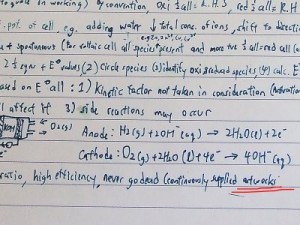 An example of bad handwriting - Mine was worse though

Since time immemorial, my teachers have complained about my handwriting. It hasn’t improved to this day and I am glad that I took writing to my computer so that I don’t have to write on paper anymore. Be that as it may. On the day of submission of my project, I was sitting in maths class and as usual scratching the paper with my shabby “calligraphy”. It was a blunder I committed because one of my friends wanted the exact same pen that I had. I bought him one and then he wanted to exchange the nib since mine was smooth.

The nib of a pen

After I exchanged the nib, I realized my blunder but still bore with it. In the middle of the class I had an idea. Will adding soap to the ink tank make the writing smoother? To test it, I took a small piece of soap and put it inside the ink tank of my pen and sure enough, I had the most slippery smooth writing experience in my entire life!

But I noticed something strange, the ink was decolorized! Just a faint azure hue remained and it looked as if I was writing with an invisible ink. Nevertheless I continued writing. I went onto the next page and the next page. Then I just returned to the previous pages and EUREKA! The writings were visible again as if it was written by normal ink. Just a little lighter but that was okay! I had discovered something!

I started to show off my new found “invisible ink” which I called “wonder ink”. Later I experimented with pure NaOH to see whether that worked the same way but that turned the entire ink into purple color.

During the beginning of my 10th std, I went to tuition at Paul Manjooran sir’s tuition center. I told him about this discover of mine and showed him this purple ink. He told that this is analogous to litmus paper used in laboratories except that the color code will be in the reverse order. He told that if I put some acid into this solution, the blue color will return. I tried mixing some lemon water into it and sure enough, the blue color came back in. I also found that this experiment works better with Bril brand of ink than Chelpark.