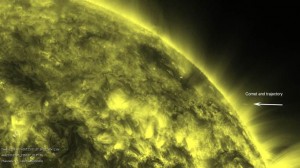 Scientists witnessed an extraordinary event for the first time in history when NASA’s Solar Dynamics Observatory stationed in outer space captured a “sun-grazing comet” descending into its demise by melting under the solar heat while grazing the star, reported MSNBC. The high definition imagers of the spacecraft spotted the disintegration that spanned a 15 minute period on 6th July, 2011 which according to SDO officials, has never been observed before.

This marked the first time a comet has been observed in real time as it disappeared though comets have been spotted near the sun before. “Given the intense heat and radiation, the comet simply evaporated away completely,” said the SDO official. In addition to SDO, another NASA-ESA spacecraft called the Solar and Heliospheric Observatory too captured the comet’s demise and recorded the video of the event. SOHO Scientist Bernhard Fleck said, “This is one of the brightest sun-grazers SOHO has recorded, similar to the Christmas comet of 1996.”

Due to the angle of the comet’s orbit, it passed across the first half of the sun and appeared to brighten as it was struck by sun’s hotter particles. Astronomers call these type of comets as sun grazers since their path is extremely close to the sun. They are relatively common and are also known as Kreutz comets, after the 19th century astronomer Heinrich Kreutz who first discovered them. Astronomers believe that these comets initially began as a single, giant comet and then broke apart centuries ago.