Current global resource utilization depends on a closely-knit economy, society and environment. However, effective limits exist on the biosphere’s capability to absorb pollutants while providing resources and services (Adams). This paper describes why in the light of issues in sustainability of Earth’s resources and growing human population it is imperative to expand utilization to extraterrestrial resources to save our civilization.

Challenges to resource sustainability arise from a combination of population increase in developing nations and unsustainable consumption in their developed counterparts (Cohen). Estimated global population might peak at 2070 with 9 to 10 billion people, and gradually decrease to 8.4 billion by 2100 (Lutz).

The average power consumption in developed nations is ~ 2 kW per person whereas in the rest of the world, it is ~0.3kW per person. The total production of power globally is ~1.9 billion kW. Based on (Lutz), if the population reaches 10 billion people by 2070, and if the living standards of the world approach current western standards, 20 billion kW would be required. This argument leads to the following possibilities:

Research in planetary and asteroid geology, spectral and photometric analysis have proposed many celestial bodies as objects harboring useful resources with nearly 50% of them containing volatile substances such as clays, hydrated salts and hydrocarbons (Sonter). The following are some examples of in-situ resources:

For Apollo-like missions, a limited use of local planetary resources on Moon and asteroids for rocket propellant manufacture would suffice. However, for a permanent, expanding, and self-sustaining extra-terrestrial colony, clever usage of planetary resources is necessary.

The cost of space activities reduce dramatically with offsets in carrying propellants from Earth’s surface to LEO and beyond (Cutler). Thus, commercial mining opportunities in space could provide low cost alternatives as resources on Earth become depleted or unusable.

The following are some of the possible profitable uses of space resources:

There are economic and technical requirements that a celestial body must satisfy to qualify as a potential ore-body in a mining engineering context (Sonter):

Scientists and mining experts are currently conducting research and analysis on planetary extraction methods based on the above-mentioned considerations. However, this type of resource utilization is still not operational because: 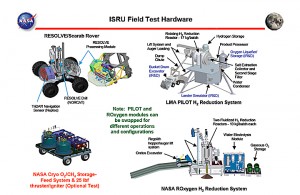 The need for a market in any type of development and management of resources is very important. The potential short term and mid term markets of space resources, include:

The long-term markets of space resources include:

Contrary to using space resources, recycle existing resources is easier to accomplish and comparatively cheap. However, considering issues like runaway greenhouse effect, population growth, self-sufficiency and long-term human presence (Stancati) in space, it is better to colonize space and utilize space resources. In addition, repeated missions to same ore-bodies (Sonter) predict requirements of higher internal rate of return with heavy discounts on sale receipts and “off-optimum” characteristics compared to the first mission or to a different target. Finally, mine operator’s interest in refurbishing or upgrading equipment and non-competitiveness of return missions from trajectory synodic considerations counteract the idea.

Earth’s resources being finite as a closed system, energy and materials from outer space being clean and available for millions of years, the solution to the growing human population and resource and energy crisis is utilizing space resources to meet the demands. Space resources have the potential to ensure survival and good living standards for human species and as these resources become more available with better technology, the value of space economy will improve (Komerath).