I added a question mark in the title because the term mother hardly applies in this context. Mother means a direct ancestor. Hence, mother of all martial arts means an art to which all martial arts in the world trace a direct lineage. This title is often given to the South Indian martial art Kalaripayattu. Being a person from Kerala, I was proud to see Kalaripayattu referred this way. However, my skepticism grew overtime and recently I have started to question the very premise of Kalaripayattu being the originator of all the other martial arts practiced in the world. I had written on similar grounds in a previous blog post and was met with violent criticism from devotees of Kalari. I don’t maintain any grudges towards the people who were abusive in their comments but I thought it was necessary to reiterate some aspects I discussed in that post for the sake of clarity. As I said before, and will say again, this article does not demean Kalaripayattu in any manner. 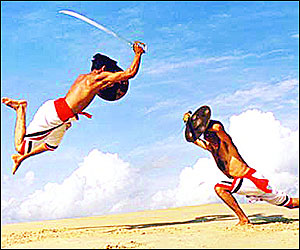 Origin of a martial art like any other art has two levels viz. the historic and the legendary. It is hard to trace history to a time when data redundancy was much higher when compared to modern times. Further, it is often the legendary version that grows out of proportion overtime and overshadows the historic part. For example, it is said that Parasurama created the state of Kerala by throwing an axe which caused the water to recede away from Gokarna to Kanyakumari. Well, on the face of it, the story is funny and unbelievable. What kind of a person can pull off such a feat? Similarly, legends say that there existed aircrafts in ancient India such as the Pushpaka Vimana, which is quite questionable. The Vaimanika Shastra written by sage Bharadwaj was studied by the Indian Institute of Science and was proven to be just a fanciful text without any scientific credence. Legend attributes many superhuman feats to Jesus, which are scientifically impossible since he was nothing but a normal human being. Hence, legends are unbelievable without investigation.

The reason I spoke so much on legends is because the famous Bodhidharma is also a legend. The alleged creator of Shaolin Kung Fu could be just another ancient legend which went out of proportion due to poor data management. Just as I spoke about Jesus, the person Bodhidharma would have very well existed. And it is also possible that he had gone to China. But then attributing the currently existing martial arts forms to him is incredible. Especially the claim that he taught Kalaripayattu to the monks of the Shaolin monastery since he wanted them to have a fit body to cope with the strenuous sitting meditation. However, there are a few logical errors with this claim as discussed below:

1. Kalaripayattu as a martial art came into prominence during the 11th and 12th century. Some claim its existence as early as 9th century. One must understand that India was not a single country in the past. Kerala itself was divided into many small kingdoms. Fighting arts were required for survival since each of these kingdoms fought among each other. Bodhidharma was a person who lived in the 6th century, which was well before the emergence of the art of Kalaripayattu. Therefore, his attribution to this martial art is questionable and hence the claim that he went to China and taught Kalaripayattu breaks down.

3. The Chinese civilization existed in different dynasties over 2,500 years before Bodhidharma arrived and allegedly taught the more “superior” martial arts which he brought from India. It is quite hard to believe that the Chinese waited for over 25 centuries without a superior fighting art for themselves. Throughout the history of China, there have been wars both internally and externally. The need for a superior fighting system was paramount since the beginning of their civilization. They would not have waited for Bodhidharma in any case.

4. As discussed in my previous post, even after the creation of the martial arts at the Shaolin, the real application of that in combat outside the temple came much later. The events between the 8th and 15th centuries are not well documented. What were the monks doing during that period? And then from 16th century onwards the martial arts of Shaolin flourished and spread across. Either the systems of Shaolin were kept a secret during that period or there wasn’t much to show outside. There were and still are martial arts that are superior to Shaolin kung fu that were developed outside the temples.

My previous post mentioned about several martial arts that existed before the arrival of Bodhidharma. And it is quite evident that the currently existing arts are descended from those arts and not from Kalaripayattu due to the reasons stated above.

I would also like to bring into light the concept of independent development. There is a limit to the type of movements that can be performed using the human body. We may use permutations and combinations to find out the number of movements that are mathematically possible but physical limitations drill down the number. Hence, any martial art used in war would eventually settle down to a few practically possible moves. There would of course be extra movements that are practiced to maintain flexibility and strength. Therefore, martial arts can and do indeed develop indigenously and independently without requiring an ancestor.

To summarize, the following issues need to be addressed by people who taut up Kalaripayattu as the mother of all martial arts:

a. The temporal disagreement between Bodhidharma’s arrival in China and the documented origin of Kalaripayattu.

b. Existence of martial arts in China before and after Bodhidharma. Especially those that have direct links with the martial arts practiced today.

c. Lack of Hindu Gods and teachings in Shaolin as well as other martial arts in China.

If anyone wants to address the points mentioned in this article without getting emotional, nationalistic, ad hominem or outright wrong, I would welcome the discussion. As a word of caution, unlike my previous post, if someone resorts to ad hominem in this, I would simply remove that comment without wasting time answering them.