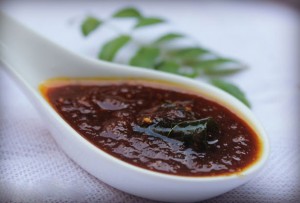 Ginger Curry or Inji Curry in Malayalam is perhaps the tastiest of all curries in Kerala cuisine. According to legends, a good ginger curry is equivalent to 1000 curries.  Vararuchi was a brahmin in ancient Kerala. He used to travel to distant places and during his trips he used to have food from the Brahmin families he visited in those places. One day he visited a house and was attracted to the daughter of the family. He however wanted to test her before he proposed his interest to marry her. So he asks her to prepare him food with 1000 curries.

The girl’s mother was baffled because she thought it was impossible to prepare 1000 curries in such a short time. However, the clever girl asked her not to worry and prepared Inji Curry. Vararuchi was very impressed with the meal that consisted of rice and just Ginger Curry. Since then Ginger Curry is said to be equivalent to 1000 curries.

If you are interested in preparing this legendary dish as it is prepared in my native Quilon (Kollam) district, then here is how you can do it.

This is the Kollam style ginger curry. Try it out and let me know how it tastes. This can be a side dish for both rice as well as drinks.