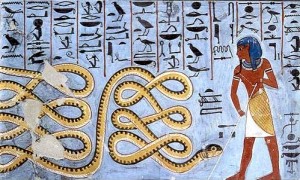 Image of Apophis as a snake in Egyptian Mythology

Egyptian mythology has a character called Apophis which was an ancient spirit of evil and destruction, a demon determined to plunge our world into eternal darkness. Astronomers reason that the name befits a menace that is currently hurling towards Earth from outer space.

Scientists for the past few years have been monitoring a 390 metre wide asteroid which is currently classified under the “Potentially Hazardous Objects” category because of its calculated collision course with the planet. Governments have already been alerted to take necessary actions to avoid any catastrophe that might arise if this rock collides with our planet.

According to an estimate by NASA, an impact from Apophis, which is scheduled to take place on April 13 2036, would generate over 100,000 times the energy released in the nuclear blast over Hiroshima. Thousands of square kilometres from the impact site would receive the direct effect of the impact and the rest of the earth will see the effects of huge amounts of dust released into the atmosphere.

Scientists insist on every Near Earth Objects meetings that there is very little time left to decide and act since the technology required to thwart an asteroid would take decades to design, test and build.  Meteorite experts say that it is a question of when and not if such an object will collide with Earth. A meteorite of the size of 1 km and above will cause mass extinction to species inhabiting our planet including us. The possibility of such collisions is in every hundred million years and it seems we are already overdue for a big collision. 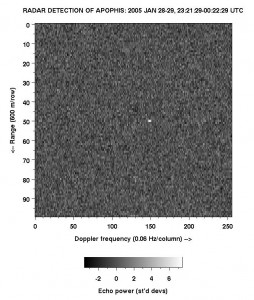 Currently Apophis is placed at 4 out of 10 in the Torino Scale which measures the threat posed by an NEO where 10 is a certain collision that causes global catastrophe marking it the highest for any asteroid in recorded history. However, the collision in 2029 was eventually ruled out as more data poured in.

Astronomer Alan Fitzsimmons of Queen’s University, Belfast said that Earth’s gravity will deflect the asteroid on 2029 and that there is a small possibility of the asteroid moving through a region in space called the keyhole. If that happens, the chances of a collision during its next pass in 2036 will be even higher.

There is no shortage of ideas as to how to deflect asteroids like these. Even dangerous technologies like nuclear powered spacecraft is under consideration. The Advanced Concepts Team at the European Space Agency is leading the effort in designing a range of satellites and rockets to nudge these potentially hazardous objects. According to Prof Fitzsimmons, the advantage of nuclear propulsion is the amount of power it generates though it has not been tested so far. Solar electric propulsion, another promising idea is already being used by several spacecrafts giving us hope that projects like these would work.

Another interesting method favoured by ESA is the proposed Don Quijote mission which intends to send two spacecrafts at the asteroid. One of them called Hidalgo is supposed to collide with the asteroid and the other called Sancho is supposed to measure the deflection caused by the collision. The test launch is supposed to take place in 2013. Another idea is to use explosives on the asteroid but no astronomer has so far supported the idea since if the explosion takes place close to impact, we might have several fragments hitting us than one thereby increasing the area of damage. 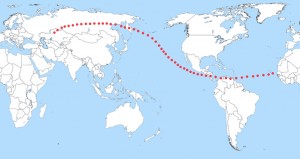 Currently we cannot rule out the possibility of the 2036 impact. However, we need to get our next chance in making an observation of this object which unfortunately will not come until 2013 when we can use radar observations and work out possible future orbits of this asteroid more accurately. NASA argues that the final decision of what needs to be done has to be made at that stage.

Astronomers like Fitzsimmons and Yates say that the preparation should start before 2013 itself. In 2029, we will know for sure whether the object will hit us or not. However, if the worst case scenario turns out to be true and if Earth is not prepared, then it will be too late. Hence we cannot wait until 2029 and start preparing now itself.